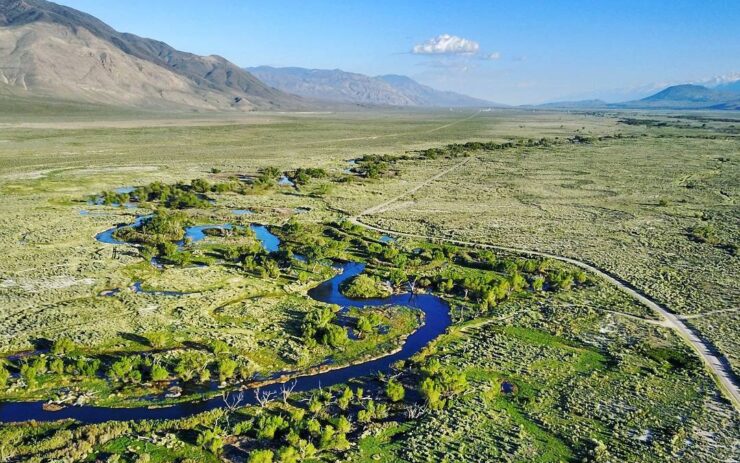 At least five species of frogs and toads eke out a living at lower elevations in the Owens Valley. Several more species of amphibians, including at least three salamander species, live on the east side of the Sierra Nevada or on the west side of the White and Inyo mountains that define the west and east sides of the valley, respectively.

Given their dependence on moisture in the soil in which they bury themselves, Great Basin spadefoot toad populations have also likely plummeted since massive groundwater pumping dropped groundwater tables below the rooting zone of vegetation (and therefore below toad burrowing levels) in many areas beginning in the early 1970s. Pacific treefrogs, however, which range from the valley floor to nearly 11,000 feet, can be found in marshy areas of the valley; stream and river areas; and occasionally even residential lawns.

High-altitude environments host a surprising number of amphibians, given a short growing season engendered by freezing temperatures. Rana muscosa (southern mountain yellow-legged frogs) and Rana sierrae (Sierra Nevada yellow-legged frogs), both endangered and both–until recently–traditionally considered a single species, have suffered massive population crashes in recent decades due to pesticide drift, non-native trout introduction, and the spread of a non-endemic fungus. (See MYL frog on the web to learn more about this.) Pacific treefrogs and Yosemite toads are faring somewhat better due to a shorter time to maturity and a more terrestrial lifestyle.

The status of east side salamander species such as the Owens Valley web-toed salamander remains less well-known due to salamander species’ nocturnal habits, shy nature, limited habitats, and a limited number of herpetologists working on the subject.