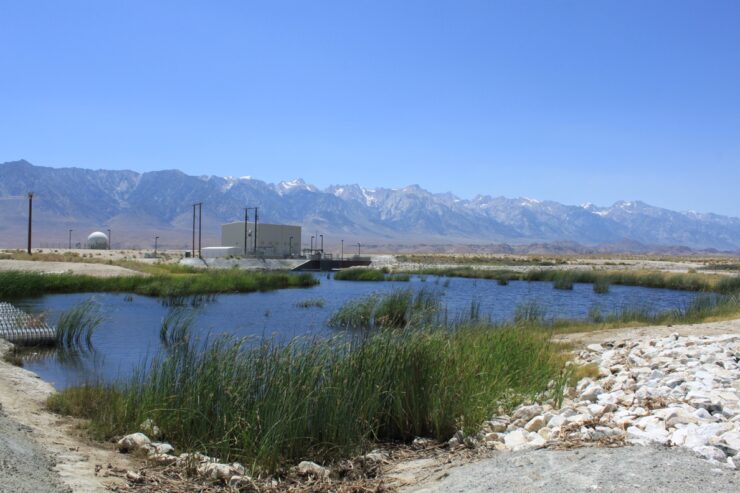 Since 1913, Los Angeles’ surface water diversions and groundwater pumping in the Owens Valley have destroyed springs and seeps, dried the Owens Lake and the lower Owens River, and caused incalculable harm to migrating and endemic wildlife.

The LA Department of Water and Power is legally obligated to compensate for severe 1970-1990 groundwater pumping damage by implementing the Lower Owens River Project (LORP).  The LORP promises to restore 62 miles of the lower Owens River; to maintain, enhance and create hundreds of acres of new habitat for waterfowl and other wildlife; and to greatly improve the warm water fishery.  The project has enormous potential for enhancing the environment, local economies, and recreation.

The restoration of the lower Owens was first formally and legally described in a 1991 Long Term Water Agreement between Inyo County and the City of Los Angeles, but a 1997 Memorandum of Understanding among several interested parties, including the Owens Valley Committee, described the project more fully and set more stringent terms for the river’s restoration.

Unfortunately, the document inadequately described future management of the Lower Owens River Project and did not meet the terms of a 1997 Memorandum of Understanding (MOU).

In 2005, in response to more delays, an Inyo County Superior Court Judge ordered the City of Los Angeles to begin flows to the river by January 2007 (among other measures) or lose the use of its second aqueduct (see “Judge rules against LADWP” 6/25/05, “Judge threatens to stop exports” 7/25/05, and “Judge rules lower Owens close, but no vacation” 3/13/07 in our news archives).

Although annual habitat flows will only be ramped up and down for a period of two weeks at most and will only peak for 24 hours (both the ramping period and the peak volume of the flows will be reduced in proportion to annual expected runoff), it’s hoped that the annual increase in flow will help distribute cottonwood and willow seeds along with rich muck from the river bottom, help provide an environment for the successful germination of those seeds, shape the river channel, control tules, and create some of the other benefits that natural flooding would (see “For Valentine’s Day, Lower Owens carries LA mayor away,” 2/15/08 in our news archives).

Currently, parties to the 1997 MOU are seeking ways to improve and/or clarify plans for monitoring and managing the lower Owens River so that the project both fulfills the terms of the MOU and fulfills its potential as one of the largest river restoration projects in the West.

To learn more about the LORP, browse our News section and the links to the right.  For a full description of the project visit Inyo County Water Department’s Web Site.