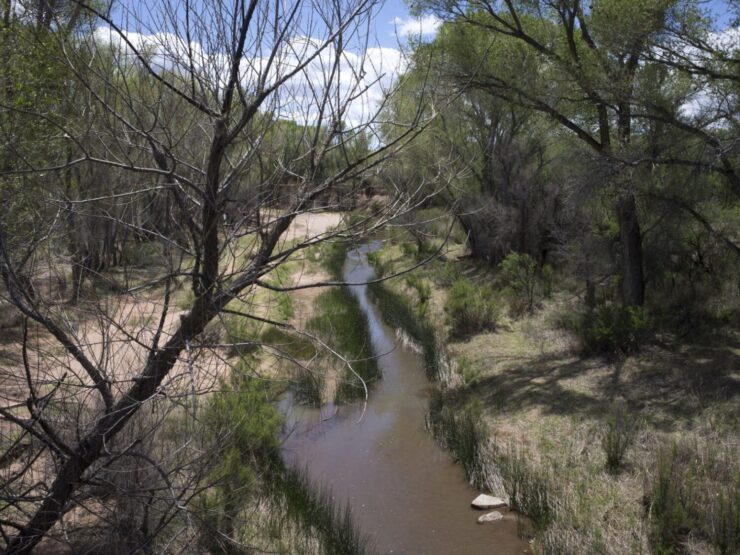 Delineations between surface water, groundwater, and underground water can be distressingly murky. E.C. Pielou (1998) provides one of the clearest definitions of groundwater when she notes that the word applies “only to water that saturates the ground, filling all the available spaces,” or to water within the saturated zone, the upper boundary of which is known as the water table.

The water table can be continuous with the surface (in marshes or swamps, for example), but in the Owens Valley there is often an unsaturated zone between groundwater and the surface– an area in which some air pockets exist or in which there might even be hardly any water. The amount of water (known as vadose water) in this unsaturated area, the permeability of the soil, and the depth of the water table (the distance between the ground’s surface and the upper boundary of the saturated zone) all have a distinct effect on the types, sizes, and numbers of plants growing above ground.

How does it get there?

That water can join groundwater reserves by percolating down through alluvial fans at the bases of the Sierra Nevada and White-Inyo ranges, by joining creeks or tributaries of the Owens River and then seeping from stream or river beds, or even by seeping from aqueducts or flowing from other groundwater systems (Danskin 1998).

The rate at which groundwater tables recharge depends not only upon the permeability of the soil and how much water enters the system, but also upon how moist the soil is (the drier the soil, the more water and time required) and how quickly water becomes available. For example, water from a heavy rainstorm might accumulate too rapidly to percolate through the soil and might instead be carried away by rivers, canals, or aqueducts; water from a light rainstorm might not even saturate surface soil and might evaporate too quickly to reach the water table.

The primary source of Owens Valley groundwater was originally snowmelt from surrounding mountain ranges that reached the valley via surface and underground water flow.  The Los Angeles Department of Water and Power’s surface water diversions (especially the diversion of the lower Owens River in 1913) crippled this recharge system, although some groundwater was and is replaced via irrigation and seepage from canals.

Why should I care?

Groundwater depletion can cause drying of springs and seeps, land subsidence, and devastation of local plant communities. These problems can, in turn, affect animals living in the Owens Valley, national and international bird populations, and, ultimately, us.

For example, a well drilled in the wrong place can cause the disappearance of a spring or seep (groundwater flows to the point of least resistance), which in turn causes the death or disappearance of all the plants and animals dependent on that spring for their existence (a factor in the plummet in Owens Valley pupfish populations).

Low groundwater tables can result in the disappearance of entire plant communities and in subsequent dust storms, resulting not only in lunar landscapes (as in the case of the Laws district after excessive groundwater pumping and little irrigation from 1994-2003), but also in increased asthma and health problems for those subjected to the dust.  Surface water diversions and groundwater pumping can affect not only the level of the groundwater table, but also the existence of lakes, springs, seeps, and rivers, which in turn can eliminate vital rest stops and nesting and feeding areas for birds and other animals migrating through or living in the Owens Valley.

See an excellent discussion of groundwater dependent ecosystems on the web

Learn more about surface water, groundwater, water management, and conditions in the Owens Valley from a United States Geological Survey Report (Danskin 1998) that analyzed the sustainability of groundwater pumping

Learn about water issues and policy from the Water Education Foundation