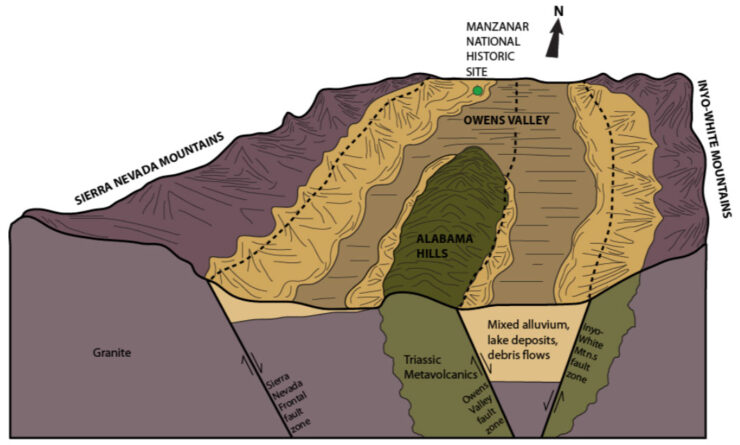 The Owens Valley of eastern California is a deep north-south trending basin lying between the Sierra Nevada on the west and the White-Inyo Mountains on the east. The valley’s maximum topographic relief is about 10,800 feet between Mt. Whitney (14,494 ft.) and Lone Pine (~3,700 ft.), a horizontal distance of only about 13 miles.

The Owens Valley is formed as a fault block basin with the valley floor dropped down relative to the mountain blocks on either side.

Such linear fault bounded basins, known as “grabens” (German for ditch), are formed when a region of the earth’s crust undergoes tension and the crust is broken and pulled apart by the extensional forces. The Owens Valley is a classic “graben” formed by extensional forces pulling the western regions of California and Oregon westward away from the interior of North America.

The Owens Valley is the westernmost basin in a geologic province known as the Basin and Range, a region of fault bounded closed basins separated by parallel mountain ranges stretching from central Utah to the Sierra Nevada and encompassing all of the state of Nevada.

The Owens Valley bedrock basin is actually much deeper than the present topography suggests, because the bedrock beneath the Owens Valley is covered with thousands of feet of sediment. The valley fill is particularly thick east of the Alabama Hills near Lone Pine and beneath Owens Lake, where gravity surveys indicate a sediment thickness of nearly two miles.

The material filling the Owens Valley is made up of sediments eroded and shed from the surrounding mountain ranges. The core of these mountain ranges consists of granitic plutons, which are uplifted remnants of quartz and feldspar rich crystallized magma chambers that intruded the pre-existing rock of the region and cooled 80-120 million years ago.

These plutons have been uplifted and exposed during the current mountain building cycle, which began as recently as 2-5 million years ago through processes related to Basin and Range extension.

The granitic rocks exposed in the high mountains are subject to high rates of mechanical weathering and erosion and the resultant granitic rocks and sediments have been carried down to the deep valley by ice during glacial ages and water through stream action and mass movement onto the valley’s alluvial fans.

The alluvial fans’ broad half cone shapes form because the coarsest sedimentary material is deposited in channels near the mountain front while the finer material is carried further out onto the valley floor.

Earthquakes have occurred during historical times along faults in the Owens Valley. The most notable historic example was the earthquake on the Lone Pine fault separating the Owens Valley from the Alabama Hills/Sierra Nevada block that occurred on March 26, 1872. The 1872 Lone Pine Earthquake was large, estimated to have a magnitude nearly 8 on the Richter scale, though, since it occurred before seismographs were invented, this is only an estimate based on the extent of damage that resulted from the quake.

The ground surface break that occurred during this earthquake, a 15 to 20 foot high scarp, can still be seen running west of the town of Lone Pine and along the eastern slopes of Crater Mountain south of Big Pine.

The offset along the earthquake scarp shows that the earthquake was not a simple east-west pull apart, but that there was a component of motion parallel to the rupture as well, with the Sierra Nevada moving northward and up relative to the Owens Valley.

During the last glacial period, which ended about 10,000 years ago, the Owens Valley, similar to many other western basins, was home to a large freshwater lake. The historic Owens Lake was a remnant of this basin filling glacial (“pluvial”) lake, which became more saline and briny as evaporation of fresh water from the lake left increasing concentrations of salts behind in the remaining water.

Though Owens Lake had been gradually shrinking since the last glacial period, unlike many of the other dry lakes (“playas”) of the Great Basin, it did not die of natural causes.

Rather, the level of Owens Lake began dropping during the late 1800’s due to agricultural diversions in the valley, and then was rapidly dried up by the diversion of water from the Owens Valley by the Los Angeles Department of Water and Power, which began in 1913. Within eleven years of the advent of the surface water diversions by Los Angeles, the lake was no more.